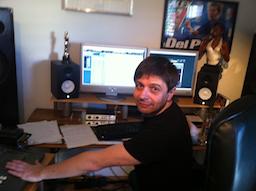 DJ Frankie Frank started his DJ career in early 1986 as resident at the legendary "The Club"(changed its name into “OXA” in 1990) in Zurich/Switzerland. He was one of the few DJs offering a perfect blend of disco, funk, soul, r&b, house, and in 1988 he added the then popular acid-house to his repertoire. After "The Club" was rebuilt and renamed to "OXA", he worked there for another two years as resident DJ. DJ Frankie Frank was also DJing and supporting many artists for live acts like the famous Sister Sledge, Imagination, Jocelyn Brown, The Cool Notes, Modern Romance, Innocence, Mai Tai, Master Freez, Tony Scott, Bruce Forest and many more! Afterwards, he started DJing in various clubs and at parties all over Europe. In 1996 he released his debut single on the Italian DBX Records (run by Joe T. Vannelli), with releases to follow on the German ProgCity label (run by Mousse T). In addition to his productions, he delivered a remix of DJ N-Joy's "The DJs List" (on Purple Music) which was played by well-known House-DJs as well as radio stations all over the world. Together with DJ N-Joy, he founded 2 DJs AT WORK in 1999 and released the hit single "All Night Is Party-Time" which was released on the Italian Dream-Beat Records (also run by the worldfamous Joe T. Vannelli, in the meantime Mister SUPALOVA) and got licensed to various countries. After that, more productions and remixes for Dream-Beat Records followed under the names 2 DJs AT WORK and DJ FRANKIE FRANK PROJECT as well as productions and remixes for other record labels and artists. The duo of DJ Frankie Frank and DJ N-Joy founded the record label Glamour Records which is accountable for successful releases by 2 DJs AT WORK, DJ N-JOY & DJ FRANKIE FRANK PROJECT, TWO OLD SKOOL BOYZ, TOO STRONG and many more. New productions, projects and remixes are coming in 2017 together with his music partner. More reMixes, mixes and new productions are coming next! Stay tuned!